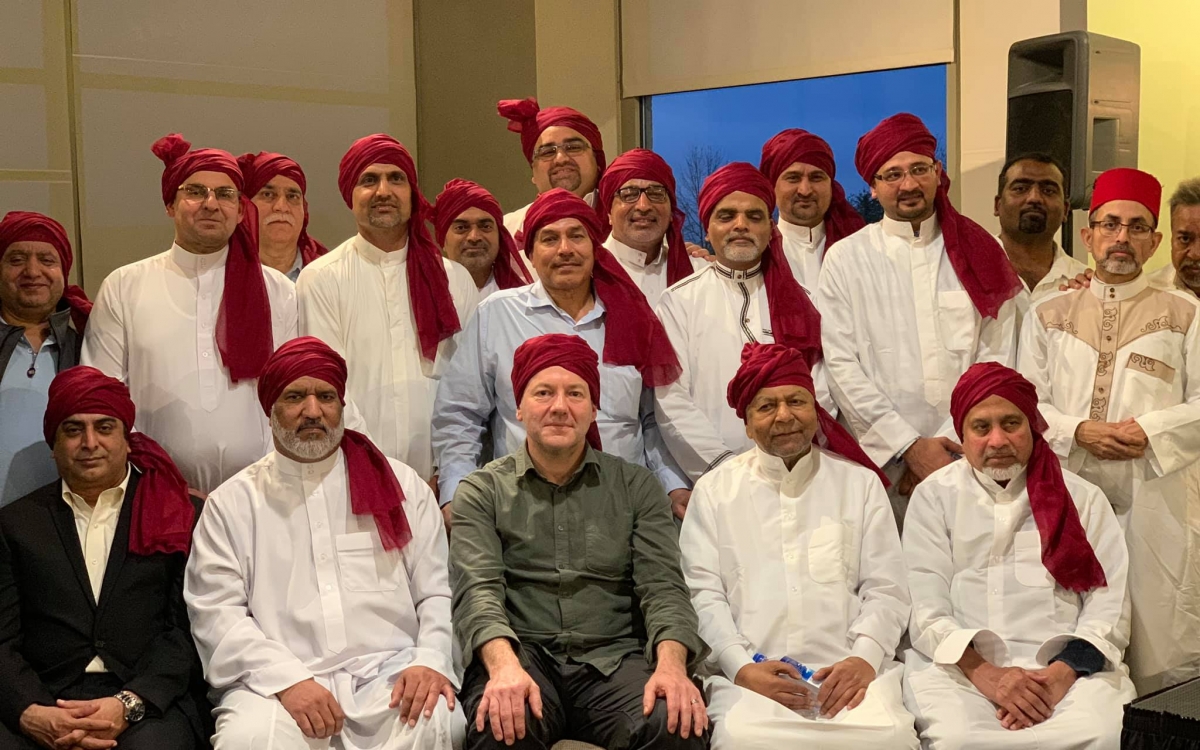 Under the auspicious supervision of the CEO of MFI and Official Representative of His Divine Eminence Gohar Shahi, Sufi Younus AlGohar, the Dastar-e-Fazillat (Turban of Honour) ceremony was held in Virginia, USA. With this Turban of Honour, many dedicated members of Mehdi Foundation International and Messiah Foundation International were officially designated to represent His Divine Eminence Gohar Shahi to the world. The following is a transcript of Sufi Spiritualist Younus AlGohar speech during the event. In 1980 when Imam Mehdi His Divine Eminence Lord Ra Riaz Gohar Shahi initiated this spiritual revolution, very deep down in HDE Gohar Shahi’s own heart, His Divine Eminence must have felt it is a very tough job. Especially coming from a country where most people are not just away from literacy, but also away from understanding. A lot of people are knowledgeable, but knowledge without understanding and application is futile, useless plus dangerous. The society in which His Divine Eminence Gohar Shahi began His message was a society heavily and hugely plagued with sectarianism, fanaticism, extremism. It was a society where every single denomination in Islam was sort of racing against the other denominations. This race was not to become more purified than the other; rather, this was the race of supremacy. Every single denomination in Islam very profusely, very strictly is of the opinion that he is the best. Hence, no other sect in Islam should be allowed to practise their faith.

It was such an intolerable society where one sect would not want to co-exist with the other. But we have seen through the pages of history that His Divine Eminence Gohar Shahi single-handedly changed the entire mindset of Pakistani society.

Now you have this revolutionary missionary going around the world and professing divine love and peace. When we tell them our origin – that we come from Pakistan – it is very shocking. They say, ‘A message of love and peace from Pakistan – can you say that again?’ Yes, it is from Pakistan. Why? Because of His Divine Eminence Gohar Shahi. When HDE Gohar Shahi began to revolutionise the society, enlighten the hearts and purify the plagued minds of people, it was nowhere near the possibility that it could ever happen. But HDE Gohar Shahi and HDE Gohar Shahi’s determination, concentration and focus are proving to the world today that anything can be achieved if you put your heart into it. HDE Gohar Shahi’s message went through hearts of almost every single sect in Islam. Whoever in the heart was not cursed by God was then blessed by God.

This mission of love and spirituality has to reach every single soul on the face of this planet Earth. This is why we need a lot of representatives.

It is the Goharian delegation. If you know what I mean. I pray to HDE Gohar Shahi Gohar Shahi, my Lord that every single individual here with this red turban on the head may be directly linked with [His] heart. Ameen. And with this delegation, sooner or later, you will see and notice a remarkable change in your spiritual senses, in your spirituality. The aim of putting this red turban on the heads is to enable you to have an enormous amount of confidence in you so that you when you reach out to the public, in your heart you know you are not alone.

Trust me, this feeling that – ‘I am not alone, HDE Gohar Shahi is with me’ – it is a tremendous spiritual feeling. It removes all the fears and reservations from your heart.

Minus Gohar Shahi, there is nothing.

I want you to know that you are delegated by His Divine Grace Gohar Shahi. You must feel that you are responsible. This turban is a burden of responsibility. You may not wear it, but still, it is there. Now, as you are representatives of Imam Mehdi Gohar Shahi, you must remind yourself every single step you take of who you are – so that your actions reflect who you are. So that what you do, what you say, should be in accordance with what you are. A representative of HDE Gohar Shahi does not do any hanky panky. He doesn’t hate anybody. He doesn’t hurt or harm anybody. He is sheer blessings for mankind.

As a representative of HDE Gohar Shahi, you must always remember a golden rule by Lord Jesus Christ: ‘If somebody smacks you on the right cheek, present to them your left cheek also.’

This is what you must practise today and onwards.

You are a mirror in which the people will want to see HDE Gohar Shahi. So make sure your mirror is never dusty and rusty.

Keep it clean. This means you should not carry out any deeds and actions that you are not supposed to carry out. I must congratulate everybody here with the utmost glory of my heart. May HDE Gohar Shahi be with you here and in the afterlife. The Oath: I aim to be loyal to HDE Gohar Shahi eternally and I promise I will not hate any religion or person.
Upcoming Event: Younus AlGohar to Speak in New York City →
← The Divine Staff
Younus AlGohar