Mr Harjeet Singh asked me, ‘If Islam and the Quran do not promote violence, then can you explain Chapter 8 (Anfal), verse 12 of the Quran?’

Before I comment on this verse, I would like to tell you that words oftentimes do not render the intended and proposed meaning, if they are used without context. We know it better, maybe, than a common man. 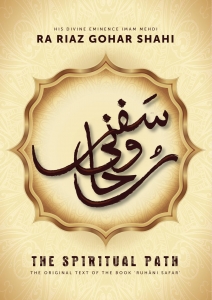 Lord Ra Riaz Gohar Shahi compiled a book. ‘Rouhani Safar’ (Spiritual Journey) which consisted of his experiences in spirituality, the time he spent in the jungle of Lal Bagh and the hurdles that were faced in the spiritual pathway. He wrote about most of the things that you encounter being a Sufi, when there is resilience, deception and a negative force which would want to prevent you from obtaining your spiritual status.

When this book went out in public, people found it really interesting and were reaping the benefits. The mystery of the divine path and the hurdles one might encounter when embarking on the spiritual journey were never found in any Sufi book.

Most of the Sufi books in the market only talk about Sufism. Nobody has actually penned down his personal experiences while he was a Sufi and seeker of divine love.

So for the fist time in history, Lord Ra Riaz Gohar Shahi wrote a book full of his spiritual experiences. These experiences explained how negative forces want to stop you and how you encounter deception and distortion in spirituality. For example, you assume somebody like God is talking to you; later on, that somebody unfolds himself and reveals he was not God.

This book was a gem, a wonderful book on spirituality. It helped. Whenever I have a problem, I consult the book and get the answer.

There are different denominations in Islam. One of the main, problematic denominations in Islam – which vehemently disapproves of Sufism and regards it as something contrary to Islamic values, like polytheism or Shirk (appointing a partner with God) – is known as Wahhabism today. When ‘Spiritual Journey’ went out in public, people who did not like Lord Ra Riaz Gohar Shahi for any reason decided to go against him. They left no stone unturned in defaming Lord Ra Riaz, and in distorting his image and message among Muslims, so that people must be stopped from believing in the message that Lord Ra Riaz Gohar Shahi had to tell them.

In order to distort his message of divine love and global peace, they took a few words without context from the book and they then issued a religious fatwa (a verdict) of disbelief against Lord Ra Riaz.

For example, Lord Ra Riaz Gohar Shahi was explaining what he saw in his dream. First, Lord Ra Riaz explained the story, and at the end, he said, ‘When I opened my eyes, the sun was in the middle of the sky. I thought it was a dream.’ The clerics did not mention that it was a dream; they mentioned the story without context. Then they issued verdicts of disbelief; this is how they manipulated the writing of Lord Ra Riaz Gohar Shahi and polluted the minds of innocent people.

When things are mentioned to people without context, in a way that appears to be blasphemous to Islam, the Quran or to the Prophet, obviously, they will detest and reject it. They will say, ‘I don’t believe this, this is Kufr (infidelity).’ This is how animosity and enmity in the hearts of Muslims started to rise for Lord Ra Riaz. This was all based on bad intentions of Wahhabi scholars in Pakistan.

The same thing is being done by ISIS and Taliban. They are mentioning different verses of the Quran without context.

When the Quran talks about killing, it is mentioned in relation to punishment of the wicked ones and mischief mongers who wanted to destroy the religion of Islam when it was still in the process of establishment. This is not a certificate for Muslims to kill any innocent human being.

I will strike terror in the hearts of those who disbelieve, therefore strike off their heads.

The historical context of the above passage of the Quran is that it was revealed at the Battle of Badr in which the pagans of Mecca traveled 100 miles to kill Muslims in Medina. Remember: there was a time in history when Prophet Mohammad felt that there was enough hostility against him in Mecca, so upon advice from God, he had to migrate from Mecca to Medina, which is almost 100 miles.

Prophet Mohammad sought peace and asylum in Medina. The Muslims were at peace when, suddenly, they were informed the pagans of Mecca were travelling towards Medina with 1000 soldiers to attack them.

The attackers were pagans. They were not Christians or Jews. They were those who did not believe in Jesus, Abraham, Moses or even God.

They believed in their national integrity: being an Arab. Their God and pride was their nationalism. They were called, ‘Pagans of Mecca.’

Mohammad became a threat to their nationalism and he was out of their reach. He went to Medina and found some people who were helping him establish his religion. The pagans felt uneasy; they didn’t want Mohammad or the religion of Islam to prosper. So, they decided to attack Muslims in Medina.

Prophet Mohammad got the news and was thinking, ‘We are a small number of people. How would we fight against so many soldiers?’ The total number of soldiers that Prophet Mohammad had with him was 313. The pagans were 1000 in number and they had all the weapons, camels and horses. On the contrary, Muslims didn’t have as many horses or camels as they did. In battle, those who are riding on horseback and holding a sword are in a better position to fight against others. It is very easy for the one riding on horseback to finish off someone walking on foot.

Prophet Mohammad had his doubts and reservations, so he turned to God. He said, ‘God help us, we are less in number. We don’t even have enough weaponry. How would we cope with less number of people fighting against people who have outnumbered us?’ And in reply to the prayer of Prophet Mohammad, God said the verse, ‘I will cast terror into their hearts.’

This verse in the Quran does not promote violence; it is a story of a battlefield, where there were 313 Companions of Prophet Mohammad and they were under attack. This was a self-defence war.

Islam was under attack and Islam then wasn’t even established. 1000 soldiers were marching towards Medina. Prophet Mohammad had only 313 people; half of them didn’t have swords and not everybody had a horse. Most of them were on foot. Prophet Mohammad was really concerned about the situation and prayed to God. God helped them.

There was a gust and with that gust, there were forces of angels who helped the Companions of the Prophet Mohammad. This verse [8:12] was a reply to Prophet Mohammad’s prayer to God.

This was when Prophet Mohammad said to God that the Companions of the Prophet were less in number and they were those whose hearts had been initiated with God’s name. He said, ‘If they are killed today, nobody with Ism-e-Dhaat would survive and your name would not spread throughout the world, so help the Muslim Nation. Help these people who are helpless.’ God heard it.

In reply to Prophet Mohammad’s prayer, God said, ‘I will cast terror into the hearts of those who disbelieve.’ Terror was being cast in the hearts of the pagans of Mecca. If ISIS or Taliban use it for Christians and Jews, they are going against God’s word.

This verse is not promoting violence. It has nothing to do with terrorism or violence. Those who say this verse promotes terrorism and violence are liars, manipulators and perpetrators.

If you take two words from the Quran and add two words from yourself, you are actually a perpetrator. You’re playing with words of God. This verse does not promote violence or terrorism.

Whoever derives a meaning that leads to allow terrorism as a result of the interpretation of this verse are perpetrators. Whether they are Taliban or ISIS, they are enemies of the Quran and God.

Secondly, Prophet Mohammad was not initiating the attack; he was dragged into a war by the fact that they were under attack by the pagans of Mecca.

Do not mention any word from any holy book – whether it is the Torah, Bible or Quran – without context. Before you comment on it, seek the background information. It is very important to avoid creating more confusion and mischief. Humanity is already on the brink of a great confusion. We need reconciliation; we need people who are just. I always say, ‘Call a spade a spade.’

If somebody is wrong, then confine this verdict to the wrong person only. Do not drag the entire religion into it. There are always bad people in every nation, in every religion.

If the Bible or the Quran talks about killing, they talk about killing in a context of awarding punishment to wicked people, mischief mongers.

If killing and punishment is all wrong, then why do we have jails and prisons in this civil society? You want to punish the wicked people and mischief-mongers; you have to do something in your self-defence.

Killing and punishment are not for innocent human beings. This is not for humanity; this is for those who want to destroy innocent people. If you don’t punish them, the society will become totally chaotic.

In order to establish justice, you need to bring the wicked people and mischief mongers to the court of law; either it is court of divine law or civil law.

However, individuals cannot take the law into their own hands. ISIS, Taliban and other Islamic militants cannot justify themselves by killing innocent people. This verse does not render any meaning, that of killing anybody.

When God said he would instil fear in the hearts of the pagans of Mecca, this was said because there were 1000 soldiers and they wanted to attack on Muslims who were less in numbers. God was replying to the prayers of Prophet Mohammad in which Prophet Mohammad beseeched God for his help.

One of the forms of the help from God was he would instil fear and terror in the hearts of the pagans of Mecca. Then the army of Muslims, subsequent to this help from God, would overpower the pagans.

So this is about punishment, not terrorism or violence. Bear that in mind.