2019 was a monumental year for the Universal Sufi Order (formerly Messiah Foundation International), Mehdi Foundation International, Kalki Avatar Foundation and ALRA TV as we took the message of divine love and interfaith harmony to more people than ever before! This year, we embraced new friends and reconnected with some old friends, introduced amazing new initiatives and passed many milestones. 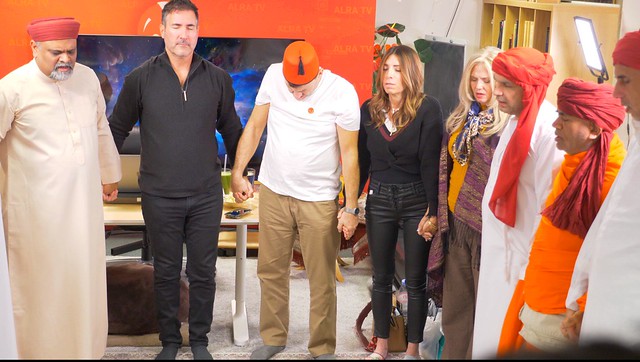 Here are some of the notable moments from the past year.

20 February: The Universal Sufi Order gives the message of divine love in Havana, Cuba, for the first time.

26 March: Selected members of the Universal Sufi Order from the USA and UK are delegated with the prestigious title of ‘Shaykh’ and given the red Turban of Honour in a special ceremony in Virginia, USA. This delegation signifies a deeper, direct connection with His Divine Eminence Gohar Shahi.

31 March: His Divine Eminence Gohar Shahi’s Shower of Love on Mexico, in which Sufi Master Younus AlGohar speaks to an audience of over 2000 people in Mexico City, Mexico. The following day, a local village, led by Shaykh Tatiana Iridia Vargas Arana, invited us to give the message of love. There, HDE Gohar Shahi opened the gates to unprecedented divinity. Every person in attendance was so moved by the mercy and blessings of HDE Gohar Shahi that there was not a single dry eye by the end of the evening. One woman loudly proclaimed that she saw His Divine Eminence Gohar Shahi himself during the special moments. She declared, ‘Señor Ra Riaz está aquí (Lord Ra Riaz is here).’⁣

6 May: Ramadan Transmission begins on ALRA TV – every day during the holy month of Ramadan, Sufis from the Universal Sufi Order recited verses of the Quran in a sequence known as Tarteeb, a little-known customary practise (Sunnah).

20 May: Jashan-e-Shahi (The Day of Mehdi), marking the appointment of HDE Gohar Shahi as the Awaited One, is celebrated all over the world.

28 June: The first ever Parchar-e-Mehdi Awards are broadcast live on ALRA TV, recognising the hard-working and dedicated advocates of divine love and interfaith harmony all over the world.

23 July: The Opening of the Spiritual Heart Ceremony performed at an event hosted by the Native American community of Sedona, USA.

25 July: The Universal Sufi Order (Messiah Foundation International) returns to the Lama Foundation in Taos, New Mexico, after 22 years. It was an unforgettable experience for everyone involved. It was filmed by the ALRA TV production team for ALRA TV’s first ever documentary.

28 July: The Opening of the Spiritual Heart Ceremony hosted at the Shrine of Holy Wisdom, an interfaith centre in Tempe, Arizona. The event was attended by people of all communities and featured a unique Zikar (chanting) of special mantras.

30 July: The Spiritual Heart Activation Event in the Urban Wellness Center, Phoenix, Arizona – we met many lovely souls that evening, including a man who had once hosted His Divine Eminence Gohar Shahi in his own home 22 years prior. It was truly uplifting to see how HDE Gohar Shahi’s message and grace have impacted people in the past and continue to do so every day.

1 August: The Universal Sufi Order connects with the founders of the Tree of Life Movement, Scott and Marla Berger, two wonderful people who work tireless to promote positiveness in the wider communities.

3 August: The Spiritual Heart Activation Event at the Iman Cultural Center in Los Angeles, USA – the programme began with an inspirational Sufi lecture by Sufi Spiritual Master Younus AlGohar offering love and compassion to the entire humanity. In a moment of special bounty, following the lecture, Sufi Spiritual Revivalist Younus AlGohar individually blessed every member of the audience with the Activation of the Heart. One participant in the programme travelled all the way from San Francisco to meet us after watching videos on ALRA TV. Another man stated that he felt his heart being activated immediately after he took Heart Activation. This beautiful evening ended with live Sufi songs by Hafiz Nadeem Siddiqui and Ring of Love.

4 August: The Opening of the Spiritual Heart Ceremony in Ojai, California – we ended our tour of the West Coast on a high note in a city known for being an international hub of peace, Ojai. The residents of this charming city welcomed us with open arms and excitement! Sufi Master Younus AlGohar was invited to speak to a full house by the Ojai Center for Spiritual Living. The proverbial red carpet was rolled out as the ceremonial horn was sounded upon his arrival at the premises. The ⁣speech was a joy to listen to as he spoke about the celestial form of spirituality – and you could see how that the audience loved it too! Every single person there seemed so energetic and enthusiastic during the entire event! ⁣Ms Paula and Ms Helen were both given the prestigious red Turban of Honour, granting them the title of ‘Shaykh’.

9 September: Day 1 of the Elementary Sufi Course, the first Sufi Course offered by the Universal Sufi Order. It was taught by Sufi Master Younus AlGohar and was available for free.

21 September – 27 November: The ALRA TV Team and Universal Sufi Order welcomes Swami Vishwa Anand from India into the ALRA TV Studios in London. He is given the red Turban of Honour and conducts Bhagavad Gita Studies during his time there.

6 October: Reverend Steve Bell delivers a lecture at the Awaken MBS Show at the Chepstow Racecourse.

9 October: Reverend Steve Bell is in conversation with the Glastonbury FM’s Steve Lee during his show, The Drive-Thru⁣⁣.

10 October: The Mehdi Foundation Mumbai celebrates the opening of another centre in Mumbai, India.

20 October: Members of the Universal Sufi Order in Mysore, India, take part in a blood drive to benefit a local hospital.

27 October: Glastonbury Spiritual Heart Activation – a hugely successful event held in Glastonbury, UK by the Universal Sufi Order. We were greeted by a full house and an audience that was ready to embrace the message of universal love wholeheartedly!

8 November: Scott and Marla Berger from the Tree of Life Movement visit the ALRA TV Studio in London, UK, partaking in the Universal Sufi Zikar and sharing their thoughts during the live broadcast.

12 November: Spiritual Heart Activation in the Three Acres Hotel, Jerusalem, Israel – the Universal Sufi Order’s first ever programme in Israel. A momentous event for all involved. Universal Sufi Zikar was carried out and a speech was delivered by Sufi Master Younus AlGohar. Afterwards, our team visited the Wailing Wall in Jerusalem, paying respect to the traditions observed in Judaism, Islam and Christianity alike.

14 November: Reuniting Our Spiritual Family, Haifa, Israel – the second programme in Israel, this time in the beautiful city of Haifa.

25 November: Members of the Universal Sufi Order in Kolkata promote the message of spirituality at the shrine of a famous Sufi, Hazrat Baba Syed Shah.

25 November: Jashan-e-Riaz (the Birthday of HDE Gohar Shahi) is celebrated with zeal and fervour around the world.

26 November: Multi-language videos released by the Universal Sufi Order so as to take the message of divine love to all communities.

30 November: Ahlebait TV, a television channel for the Shiite Muslim community in the UK, invites Sufi Master Younus AlGohar and the ALRA TV Team to talk about Sufism

14 December: New shows introduced to ALRA TV, including The Esoteric Jesus with Reverend Steve Bell and The Daily Pulse with Sufi Nasir.