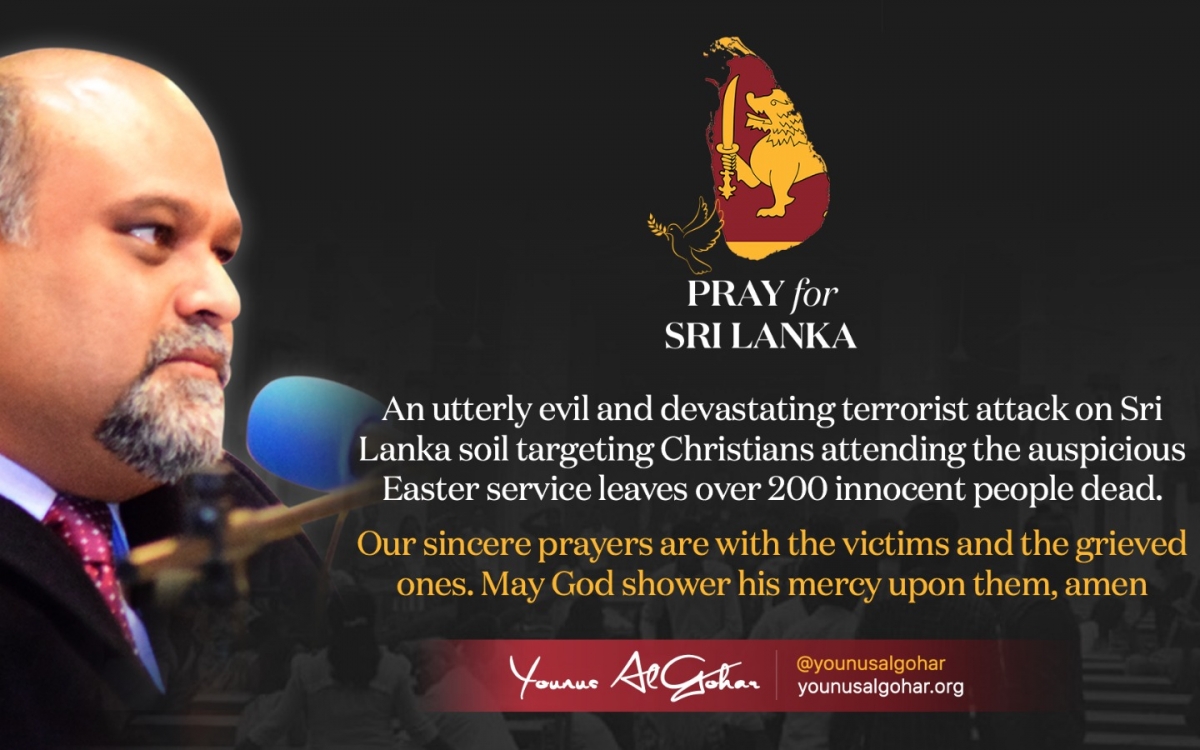 The following is a transcript of Sufi Spiritualist Younus AlGohar’s speech on Sunday, 21st April, soon after learning of the devastating atrocities that took place in Sri Lanka.

It is a very sad day. What we can do as the public is only to condemn and give condolences. But the authorities concerned are always in a position to protect its citizens. It is a very enjoyable job to become the Prime Minister of a country. It has a lot of perks: glamour, power, authority – but above all, a lot of responsibility.

A president or a Prime Minister of a country is like a father figure to the entire nation. It is the job of that Prime Minister and president to ensure the safeguarding of the citizens. Sometimes, they do take preventive measures. They do their best to protect their citizens but even then, there are atrocities and people lose their lives.

These terrorist activities are increasing in number. Analysts who give their analyses on these events also have a very sensitive job. Most of the time, in most cases, their opinion becomes part of their analysis. Because the voices of such intellectuals and people who come from the media are heard in the public, anything they say is accepted by the public. It plays a lot of pivotal role in shaping and carving the minds of people. These individuals who give their political analyses on certain events, they have to be very careful. In most cases, when an atrocity – an act of terrorism – takes place somewhere, most analysts jump to conclusions with their premeditated understanding. They instantly put the blame on religion.

I want to tell you this is not the religion that is prompting people to spread hatred. I was really shocked and very dismayed when I read this tweet from Imam Toheedi, the ‘Imam of Peace’ from Australia, in which he was inciting people and he was telling them, ‘Wake up. This is a war between Islamists and Jesus Christ.’

No, that is not right. This is wrong. According to Islam, there is no place for terrorism or unjustified killing. There is no place for such brutal and devastating, cold-blooded activity which is seemingly carried out under the banner of religion. But one has to be very careful to utter out any words, especially when they label a religion as a terrorist religion. If blowing up a church is a war between Islam and Jesus then what was blowing up the mosque in New Zealand? So, this is wrong.

It is a natural feeling that when innocent people lose their lives in such atrocities, one naturally becomes gloomy and saddened. We are also very sad but sometimes this sadness is entwined with anger. This sadness is entwined with anger when you realise that such a brutal killing, carnage and massacre of innocent human beings could have been prevented.

Only if preventive measures had been taken in time and it had been ensured that those who have been suspected of becoming a potential terrorist, they should have been on the radar of the agencies. Especially when, after such events, the secret forces of a country come up and they give their statements that they had already informed the Prime Minister of the country ten days prior to these events – they had even given phone numbers, names of the group and places. But the Prime Minister was so busy that he did not give any heed to the tip-off given by the agencies of the country.

Such heedlessness cannot be justified, especially if it is coming from the premiere of the country. Being the Prime Minister or president of the country is not just about enjoying the power, seat and glamour; it is more about protecting your country and citizens.

During my two visits to Batticaloa and one visit to Trincomalee in Sri Lanka, I noticed there is a considerable amount of population which is a potential terrorist camp. I have been so vocal about certain things, especially when it comes to unfolding the hidden face of Wahhabism.

During newspaper and television interviews, I have been telling people about it for the past many years that the source of modern-day Islamist terrorism is Wahhabism.

Two years ago, we even took it to publicly demonstrate how Wahhabism is the main source of terrorism. We were working on this petition about banning Wahhabism in many countries. We had this demonstration in India, ‘Ban Wahhabism’. We had it in England, the USA and Canada but, sadly, the petition was taken off somehow or other.

It becomes even sadder when you know that on a higher level, the people with more authority in their hands, they want to play a blinder to the truth right under the tip of their nose. They know who is responsible for such brutal carnage and massacre of human beings right across the globe. It is not just Sri Lanka, it’s been everywhere: whether it is New Zealand, Sri Lanka, Pakistan, Bangladesh, USA, UK, Canada, etc.

With all the technology that we have today in such developed countries, if we are unable to stop these terrorists, then what is the use of such technology?

In 1989, there was [turmoil] in Karachi. I was with His Divine Eminence in Kotri [another city in Pakistan]. We hadn’t been vigilant enough to protect one of our centres in the Shah Faisal Colony, Karachi. There were people who came and tried to shoot someone there.

I remember an interview I gave to a newspaper in Sri Lanka about four years ago. I mentioned there is a potential threat of terrorism in the country and the government should be aware of this and take preventive measures about it. One of the journalists said, ‘There is no terrorism in this country.’ Instantly, they ruled out the possibility of such a thing.

We pray to God there is no untoward incident like this in any country or city of the world. But at the same time, are we not supposed to take preventive measures before the accident? What if we are more careful? What if we are more vigilant? We could have saved these people who died without their due death.

If not today, then tomorrow the time will come when the entire universe will come to know that this brutal killing, carnage and massacre of human beings throughout the world under the banner of Islam terrorism is Wahhabism. The Wahhabis must be exposed, and at the same time, they must be recognised as non-Muslims. They have their own brand of the religion, it has nothing to do with the principal core of the religion of Islam.

Islam, principally, is the religion of peace. Islam doesn’t have anything to do with terrorism. But today, even many so-called progressive and pragmatic Islamic scholars put the entire garbage, accusation and blame on the religion of Islam. Islam does not teach hatred. Islam does not teach people to kill others. If you study the Koran, the Koran equates killing of one man to the killing of the entire humanity. we must understand that Wahhabism is not Islam at all.

There are videos of Zakir Naik (a Wahhabi cleric) from Mumbai in which he said, ‘For us even to believe in Prophet Mohammad (PBUH) is an act of Shirk (polytheism).’ This is not Islam; this is Wahhabism.

Do not call it Islamic terrorism. Call it Wahhabist terrorism. This is not coming from Islam. What Baba Farid, Bulleh Shah, Khwaja Gharib Nawaz, Data Ali Hajweri, Lal Shahbaz Qalandar preached is Islam. They are the true flag bearers of Islam. They gave the world the true meaning of Islam. What is coming from Saudi Arabia in the guise of Islam is not Islam, it is Wahhabism.

The message that I want to convey to the message to the public and government of Sri Lanka is that sooner or later, willingly or unwillingly – happily or under any political compulsion – you must root out Wahhabism from Sri Lanka. Otherwise, my friend, you will continue to make the world sad like we are today. That is my message for our brethren in Sri Lanka, whoever they are: Catholic, Christians, Hindu, Muslims. Our message of love reaches out to everybody. We are not enemies to anybody.

We understand such terrorist activities are not coming from Muslims. They are coming from hate preachers who pose to be Muslims but they are not Muslims in reality. Islam is just an excuse for them to do what they are doing. Their hidden agenda is hidden to everybody. Therefore, do not hate Muslims because this terrorist terrorist attack was carried out by a Muslim. It is very unfortunate that the terrorist activity that is taken place today in Sri Lanka was carried out by a so-called Muslim, but that so-called Muslim has nothing to do with Islam.

If Islam teaches terrorism, then why wasn’t Sheikh Abdul Qadir Jilani a terrorist? Baba Mohiuddin was a Tamil, a Sri Lankan citizen, who came to the USA some 70-80 years ago. He lived in Philadelphia all his life. He never spoke English. The language he spoke was Tamil. Even then, he spread love. His followers comprise Jews, Christians, Muslims, Hindus, Sikhs alike. Why wasn’t he a terrorist if Islam teaches terrorism? Why wasn’t Moula Ali or Lal Shahbaz Qalandar a terrorist? Data Ali Hajweri, Bulleh Shah and Mevlana Rumi are not terrorists and they are all Muslims. So what people are following today is Wahhabism, not Islam.